National Assembly of the Republic of Armenia Ratified the Kigali Amendment 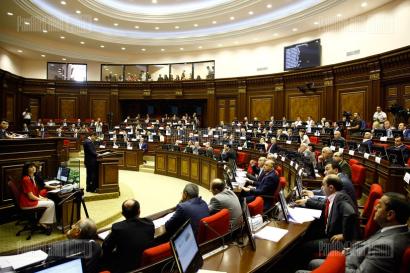 On 27 March, 2019 the National Assembly ratified the Kigali Amendment of the Montreal Protocol on Substances that Deplete the Ozone Layer presented by the First Deputy Minister of Nature Protection of Armenia Irina Ghaplyanyan.
Kigali Amendment is the fifth amendment to the Montreal Protocol which came into force on 1 January, 2019. This amendment adds to the list of substances controlled by the Protocol hydrocarbons (HFCs) which being very potent and long-lived greenhouse gases contribute to climate change.
Phase-down of HFCs is expected to prevent the emissions of up to 105 million tons of carbon dioxide equivalent of greenhouse gases, helping to avoid up to 0.5 degree Celsius of global temperature rise by 2100 while protecting the ozone layer.
Implementing measures envisaged by the Protocol Armenia will continue to contribute to the ozone layer and climate protection.
Armenia became the 70th country to ratify the Kigali Amendment.

You can follow the link to see the Law on the Kigali Amendment to the Montreal Protocol on Substances that Deplete the Ozone Layer.